You are here: Home / Chronicles / The SANs are suddenly talking…. 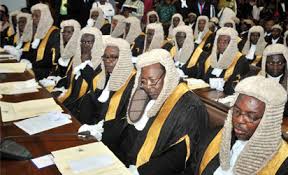 The SANs are talking…

When you want the senior lawyers to talk in Nigeria, you have to “deal with” a big time suspect. In Nigeria, the meaning of rule of law depends on how much is involved. Just catch or arrest someone who has stolen big money, then SANs and judges start coming out to get involved.  That is the reason it is difficult to apprehend a big time rogue. You can see why corruption would be difficult to solve.

Lagos state budget for 2016 is about 670 billion naira( about 2.3 billion dollars). All the people ranting(for Dasuki} with the rest 20 million people in lagos are to have 2.3 billion dollars spent on them for the whole of 2016 by the state government. However, only one man called Dasuki collected, chopped and distributed as he liked the sum of 2.2 billion dollars. The annoying thing is this: He still has people who are ready to support him without shame. This is strange!!

Do you in your heart of heart feel that dasuki, with the resources he has should be treated like any common Joe on the street?  Do you think with that kind of money that he possessed he wouldn’t be able to influence anything once he is out of jail? C’mon folks, you don’t need a sooth-sayer to tell you how powerful such an individual could be once he is out jail. In a poverty stricken society like us, the power wielded by such individual can only be imagined once he is free up there. To deny that is to deny reality.

“Rule of law” as insisted by politicians in Nigeria only describes compassion to rogues. When  many SANs  shout in Nigeria, they do so to help a billionaire thief avoid prosecution. The same way they prevented Ibori from being tried in Nigeria. The same way Saraki’s simple corruption case at the CCT has been so muddled up by the same SANs and their protégés within the judges. They have made the judiciary a place where the powerful thieves are innocent until they are never found guilty.

Buhari should treat Sanusi the same way the common petty thief is treated in the market square. If some people are ready to allow big time thieves sleep easy in their homes, it is their call. For us, the motor is simple: If you chop with mindlessness and wickedness don’t expect saintly behaviours to beckon on you.  All the big human right grammar that made no sense to you when you were whacking and chopping would not equally make sense to your traducers when you are under.

To Dasuki and his supporters; he would not see his darling wives soon.  You can take that to the bank… Ewolewoo!!