You are here: Home / Chronicles / Saraki: The face of a wicked man!! 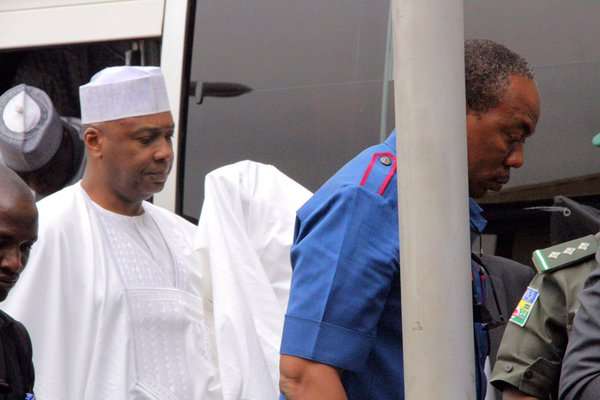 Saraki was in court on Tuesday and Wednesday to listen to what he had studiously fought not to be listened to. Nigerians got, first hand, what Saraki has fought that it shouldn’t be heard.  Kwara people were told in plain language that they are “buffons”.  They read how Saraki stole their money in broad day light. He stole, stole and stole to the extent that he never got tired stealing.  Ki’lode? Obu gini? Me a faru?  Na wetin?? God dey sha!!

Take a time out and listen to the testimony of the EFCC guy at the CCT, you would question whether God is really up there. He gave evidence showing how Saraki was transferring and transferring large sums of kwara  people’s  money into his personal account. He gave details of how Saraki was using kwara people’s money to buy houses in London and Lagos. To make this more horrible to hear, we were told of how Saraki bought Federal government properties in Lagos, not with his money, but with Government money. So who lost? Abu’s money was used to buy Abu’s Property. Kelechi’s car was bought with kelechi’s pension money. What do you call that?  No be wickedness?  Yet this character is still the senate president of Nigeria. Na wa o!!

After stealing kwara blind, he still collects salary as a Governor till date. Ahmed(the present governor) can deny all he wants but the evidence is so clear. The luck Saraki has is this; Nigeria and Nigerians show too much admiration for rich men no matter how uncomfortable their sources of income might be. If it’s not so, saraki should be facing serious money laundering issues in addition to the false declaration of assets case at the CCT. What he did in kwara was classic money laundering.   Saraki  should really be facing repercussions on it.

How come the place where a pick pocket is thrown to is the Jail while Saraki is being told to just resign and go? If Saraki is found guilty, he shouldn’t only resign but he should have a date where wicked characters like him are “secured”. The name of that “secured place” is called Prison.

Saraki is a lucky man I must confess. He is lucky because many Nigerians are busy looking for petrol. For now, many people are not seeing him as a priority to get bothered about because of this.  I just hope that the court depositions  by the EFCC can make sense to some people in kwara state who would see him as the person that he is. A wicked thief!!

I have written a lot on Saraki that I would invite you to take some time and read through some of the posts. He should understand that everyone is no fool. Once you are caught as a thief in the market , you are labelled as such.  Just pray that the mob action would be forgiven on you. For Saraki, the mob action is “waiting at the junction”. He should beware!!

You can read some written posts on saraki as posted below:

Saraki: The making of an artful dodger.. http://ewolewoo.com/saraki-making-artful-dodger/

…And Saraki goes to court but… http://ewolewoo.com/and-saraki-court-but/