You are here: Home / Chronicles / Saraki for President!!!!!! 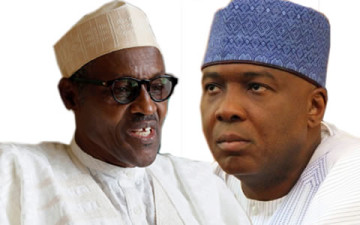 I am not a fan of Saraki and I have never been. If I had my way, he would have been a former Senator by now, talkless of  being a former senate President. However, I have to admit a fact: He(Saraki) understands the system and he knows how to game it. Is he doing a good job of it? Definitely he is a Field marshal in how the crooked Nigerian system works.

In a normal clime, a person who is in court for corruption offence would not be sitting as a senate President. I know for a fact that no one would dare employ, into his personal company, someone who is in court on corruption charges. In Nigeria, Saraki is still holding fort as Senate President while also presiding over blocking “others that he doesn’t like” who are accused of corruption from getting to the Public office. Yet Saraki still has a date in the unfinished corruption trial in the court. Like it or hate it, He is a “champion” in that senate. This doesn’t sound like a dummy-guy  to me. This looks like the Mafioso boss play book.

Ibrahim Lamorde(the immediate past EFCC boss) was practically chased out by Saraki when he had the effrontery to interrogate his(Saraki’s wife,Toyin) on several sleaze that encompass what saraki stands for. Lamorde didn’t know what hit him when Saraki bellowed on him. He has dissolved into wherever he came from. Mind you, if you ask Farida Waziri(Lamode’s predecessor in the EFCC) how she became the boss during Yaradua’s reign, you would see Saraki’s name all over the map. Now Magu is now in Saraki’s line of fire when he blocked Saraki’s moves in the CCB. Would he survive it? I can’t vouch for that, because Saraki seems to know how things move than anyone.

In the Presidency, I am sorry to say this: Saraki seems to be more grounded there than Buhari. If the DSS, as the senate claims, can be more interested in showing Saraki the security reports against Magu, a Buhari appointee, then what are we talking about? Someone definitely understands the language being spoken, and definitely, my bet would not be on Buhari. Saraki is a master of the game.

Check out when the issue of senate Forgery came into the open, Saraki showed how savvy he could be. By the time he worked on the Attorney General, the case became anaemic. For now it is just hot air. Saraki has the ball and he knows how to score. Sad but true!

When APC people were busy planning their so-called internal democracy to choose the senate President and the Speaker of the house of rep. Saraki showed them that they were “secondary school boys”. He went to the PDP folks and with some “rogue” APC elements, he got his seat. Chikena! Ofcourse at that time president Buhari was still in honeymoon of his Presidential victory. Saraki knew that and he moved in. The rest as they say is history. He seems to get what he wants, I have to agree to that fact.

Just because of saraki, the CCB and CCT  laws would likely be amended if what the senate are pushing is anything to go by. This guy has shown that he clearly understands how the system works. He has demonstrated a capacity to beat the system and still make the system “thank him profusely”. This is the only man who is can be a “rogue” member of the APC and yet could get some of the best advantages APC  can offer. He is not a member of the PDP, yet he has all the PDP members lining behind him. He is not in Presidency, yet he has some strong members of the presidency agreeing with his bidding.

The way it is, Saraki has shown that he understands the way a criminal system works. Buhari is my man, but in this case, Saraki has an edge in his understanding of how to slap us and still make us want him.