You are here: Home / Other News / Saraki is desperate. Dino Melaye to the “rescue”… 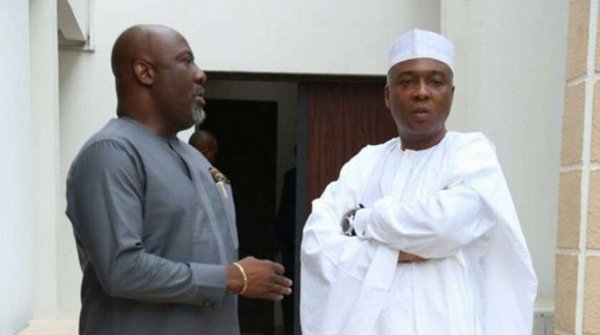 At the moment the senate President, Bukola Saraki is a desperate man. He is living in a full A/Ced palatial mansion but at the moment sweating profusely in his agbada. The situation is quite precarious and it would not abate soon. Dino Melaye, his bosom friend and protégé has seen this saraki melt down and he(Melaye) has gone crazy.  Dino Melaye is not enjoying the “wahala” that Saraki has enmeshed himself into, so, he is fighting the internal frustration that this brings. The Frustration cannot and would not abate.

Saraki  has just realized what he never wanted to see initially. He has seen that the Senate Presidency is just nothing. A useless deputy governor is far more important than him in the scheme of things. The deputy Governor cannot be charged for anything but he(saraki) is in the dock as we speak.  Nothing, I mean nadaa, for him. Melaye’s resort to abusing and cursing everyone in the chamber only depicted the extent of Saraki unravelling troubles. Melaye knows that the noose is tightening around Saraki and he’s scared.

If you are surprised that a senator of the Federal republic threatened to rape a female colleague of his and beat her up, then, it’s either you’re being funny or just not real. For over a year we have been saddled with a senate President who is in court for corruption. The man is an accused person in an on-going corruption case at the CCT yet he is still our senate president. This same character is on bail for a forgery case, yet he is still being sustained by Public funds. If we could allow this nonsense, on what moral ground are we standing for demanding that Melaye apologises or resigns? It just doesn’t make any sense.

One good thing in this scenario is this: Saraki is scared and he is really not having comfortable sleep anymore. The people who proffered his charges are not like Lamorde(the former EFCC boss) that saraki scared off. These are new people who have never been in Saraki’s radar. This is where the real issue lays.

Melaye should check his Blood pressure regularly because the situation is about to get far worse for Saraki. The man(Saraki) has found out late in the day, that once a violent mixed-breed-dog, due to its stupidity or inflated self-ego, enters deep into a jungle infested with lions, turning back becomes more complicated. It could be the end of the dog. Melaye’s rants cannot rescue saraki….Ewolewoo!!

For Saraki and Ekwerenmadu: Why should Nigerians continue to to pay your bills?

For Saraki and Ekwerenmadu, the time for dodging is over. Let the case begin…