You are here: Home / Chronicles / Senator Stella Oduah: Another Example of EFCC’s failings 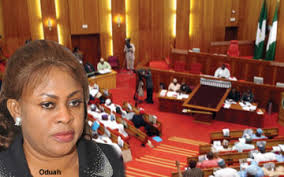 The former minister of Aviation who is now a senator has taken the EFCC to court over the ‘temerity’’ of the EFCC in trying to investigate her. She is wondering why anyone would want to investigate her for ‘ claiming to buy’  2 armoured cars for US$1.6 million(about 320milllion naira) only. And do you know what? The Judge, in the characteristic manner of the Nigerian judiciary when big man dey case, has given a lien on the investigation. He don talk say make dem nor do anytin on the case till October 2. How would you disturb an investigating authority from investigating? I nor understand.

I am aware that Senator Oduah is the owner of sea petroleum and Gas Company. I want to know if she has bought an armoured car from her company’s account that is worth that amount. I know you can guess the answer. My money na my money, government money is nobody’s money so spend it anyhow. This is the abiding philosophy in government money. Little wonder everyone is shouting for government appointments. With something like this, who is a fool?

Actually, We also brought this out as an example of the ‘failings’ of the EFCC to show a pattern which has really become unfortunate. When you waste time in fighting corruption, when you drag your feet in fighting graft, when you engage in gra-gra in the issue of fighting corruption, this is what you get. You get into a situation in which people that you are supposed to be prosecuting would be “prosecuting” you. When the only thing that defines fighting corruption in EFCC is what I call “showmanship” then all this confusion would always come up. Dem nor dey do naadaa…. They are expert in going for Lilliputians. EFCC would run after ordinary bank tellers and bank managers. They would  publish their names and convictions in the papers but would take 4 years in arranging Abubakar Audu. Mind you,  Abubakar Audu would soon be the Governor of Kogi state.  You go blame am? If Fayose who was under prosecution could be governor why not Audu? All na EFCC fault and nothing more.

That a Judge could even listen to this case at all shows how the system works. You can better  understand the reason Emmanuel Okoyonmo (the former managing Director of Nigeria security Printing and minting company) has been “fighting kataka” not to be repatriated to the UK to face charges of corruption. He prefers to be tried here. I would too if I were in his shoes. If it were here, he would have just gone to court to stop whatever investigation in whatever manner of the bribery allegation. He would just drag the case forever.  Peter Odili is enjoying Judicial immunity as we speak. You can’t investigate him because EFCC decided to be “ajuaya” (apologies to corpers). A court gave an order and EFCC decided in her usual manner not to appeal. Odili is as free as a butterfly because of that.

We would continue to push Mr President to get these anti-corruption agencies to work. He has to because he needs to. He should understand that everyone would never like him nomatter what he does. He should know that some people would not like him because of religion or tribe or anyother reasons they had in not supporting him earlier. That is democracy where everyone has the right to like or dislike. He should be less interested in pacifying everybody but more interested in making the system work efficiently. If he tries this, anticorruption agencies like EFCC and ICPC would be more serious and characters like Oduah would  know that ”chopping” has consequences….. Ewolewoo!!