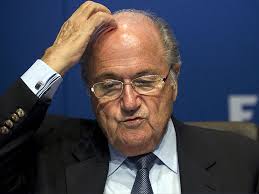 Today, the Swiss security people zoomed into the FIFA President  Sepp Batters’s office. They interrogated him on corruption matters. To make it worse I heard Platini’s name has been mentioned in this roller coaster event. This is getting serious by the hour.

Blatter as we speak is being “forced” into resigning before February 2016 that he promised he would. He had already set up his own internal FIFA probe to fish out others inside FIFA in terms of this same corruption issue. He said he would reform the organisation. Now he is being personally investigated. Just imagine that!!

Sepp Blatter should not condescend to this political witch hunt being perpetrated by the US and supported by the European governments. They said he paid Platini 2 million dollars as loyalty bonus. They even detailed some dealings he had with Jack warner(another great guy) in terms of money matas. So what? As a FIFA president he has the right to distribute FIFA’s money anyhow he deems fit. Why embarrassing him? Money is to be spent and spend he did. What did he do wrong?

This world is surely coming to an end I tell you. Why are people so wicked? Do they think everyone likes poverty because they like it? Tufiakwa! ! Sepp Blatter should not allow himself to be distracted because of some godfathers who believe they own football. He should assert his independence!!

Sepp Blatter should rush to Nigeria and get SANs that would surely get him an injunction from further prosecution, investigation and any form of harassment from the authorities. This is political, diplomatic and sporting prosecution. Is it because USA didn’t get the hosting right to 2018 World cup? Is it because the UK couldn’t get the right to the 2022 world cup competition? On what basis are they disturbing him? Can’t someone chop where he is working? What kind of nonsense is this?

Blatter don’t mind dem. They are low life people who believe that people must not be very rich just because they are heading an organisation like FIFA. Holy Ghost fire!! Let the various enemies lurking around be dealt with. Haha!!! what is this world turning to? People cannot help themselves to their God’s given rights and priviledges again? Goduooooo!!!!

Sepp Blatter, don’t worry we would make sure that all weapons fashion against you by these politically charged enemies of yours fail. We are behind you all the way. The lawyers are waiting; I have about 8 SANs on standby for you once you give the signals. Bad people all around…

Meanwhile, chief Sepp Blatter remember I am always your loyal fellow. Just indicate the control numbers of the account numbers to me for safe keeping.  You can trust me….Ewolewooo!!!