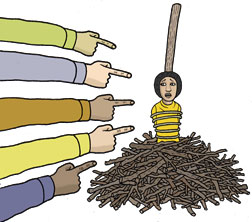 Some people should understand that chopping is part of a big politician’s life. They shouldn’t be angry when a politician is feeding fat on their collective resources. In Nigeria, it is given that a man who works for the people must be adequately fed by the people in ways and manners that he deems fit.  See me see wahala o!!

Why were People calling saraki “öle” in Ilorin yesterday?  They should understand that it is a politician’s duty to chop and chop very well. Are people that mean? Don’t they know that owning houses in Ikoyi and Banana Island demands lots of money? Don’t they understand that having millions of pounds and dollars in domiciliary accounts is befitting of a politician with pedigree and status? Why would they be complaining in Ilorin, that their “bail out money” is being used to fight political battles in Abuja? If the money is not used where else will the money come from?  They should “chill”for their salaries. When we are through with the Abuja troublemakers we would then face the salaries. Don’t be enemies of progress.

People should understand that this is  “witch hunt”. Na pray we com pray o!! People need to let “guy man” enjoy his money in peace and stop listening to “bad belle” people. What were they actually expecting? They should understand that “enjoyment unlimited” is our name o!! Throwing stones and water sachets on a “whole no 3” man in the country get as e be biko!! Wetin we do sef? Others have done more yet no one is killing them. Just because someone is the Senate President, they won’t allow him to rest. Did someone commit murder by being the senate President? People help me oo!!

We need to get Dino Melaye and Ali Ndume to Lead a probe into this “wanton embarrassment” on the senate President. Na wetin be ds? Someone would not chop again in Nigeria? People, fear God o!!! Do you actually expect me to start joining the train service with you? Are you in the UK? You should understand that what you guys are doing now is not fair o!! If the President has decided in his own wisdom that he must declare 30 million naira as cash in his account, na im wahala be dat. E nor concern me at all. I am not a poor man o!! My father was a very rich man. He owned a bank. Whether the bank “died”or not is not the issue. The point is that he owned a bank. How many of you have (or had ) fathers who owned banks? So why must you compare that poverty life to mine? Take time ooo!!

Wickedness is our major problem in Nigeria. Jealousy, jealousy na im dey worry us hia. That I am a billionaire is making a lot of people jealous. I have become senate president dem wan die. If I chop moni nko? How is that a problem? You people should free me and my madam o!! Let us chop our money in peace and tranquillity.. God I am in your right hand side o!! Save me from my enemies..