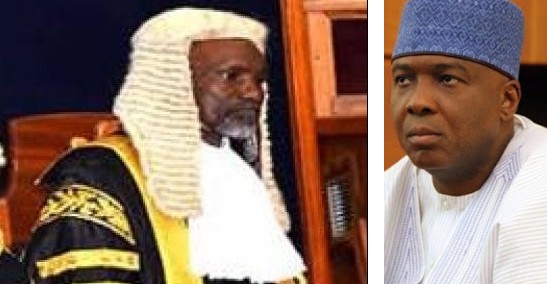 The Supreme Court of Nigeria, quite uncharacteristically, told Saraki to face the CCT. He was told to face the charges he’s been running away from. This is a surprise to me because with the way the Apex court took his case up, I was only sure of a “predetermined route”.  I am sorry; the court has her agenda which is quite at variance with the general norm.

One sure thing is this: the person that would be judged in 2019 is President Buhari. No one would talk about the justices of the Supreme Court. No one would talk about or review the actions of Saraki and Dogara in 2019. The only being that would be blamed or praised in 2019 is Buhari. However, it should be clear to him that the Judges in the Supreme Court are not for him or whatever he believes in. They have “a language” that defines their individual beliefs that some politicians really understand.

The judges in the Supreme Court have indicated to the courts below that   they must “appreciate their powers” above before giving any Judgement. If they didn’t do that, their judgements would be rendered useless nomatter how sound.

When I wrote this article on Wike’s success, http://ewolewoo.com/wike-won-supreme-court-understands-supreme-court-language/  , at the supreme court, I never knew I would be prophetic.  In this article, I predicted that if the Governors of Abia and Akwa ibom states followed the principle of “understanding the language” of the supreme court judges they would win.  It was like I knew what would happen as the Supreme Court just affirmed their elections.  The Supreme Court was totally predictable after seeing what they did for wike.

The way it is, it doesn’t matter what any lower court rules, the supreme court  is now an interested party. The EFCC needs to understand that , what it takes a high profile corruption suspect to do in the lower court is to raise preliminary objections  on any case. If the objection is refused by the lower court, the guy would just push to appeal up to the supreme court where he could hope for malleable listening ears.

The way things are going, corruption cases might need to be “outsourced” to foreign judiciaries. We all saw what happened in ibori’s case, where the supreme court judges  said they were not sure he was James Onanefe Ibori. However, he pleaded guilty as James Onanefe Ibori to a London court.  We have, unfortunately, gotten to a situation where the judges don’t bother about public perception anymore. They only bother about their bank accounts whenever they are handling corruption cases.

Supreme court is already complicating all processes with the unnecessary perception of personal interests by the Apex court’ Judges. Recall how Salami was suspended because of the then Chief justice’s interest in Sokoto state governorship petition case.  This was about 4 years ago and many of the Judges are still there.  This is really interesting.

Meanwhile Saraki should know that he has been outspent by the desperate governors. The people he was talking to have seen “better tins” from the Governors that Saraki couldn’t match.  He has realised that the kind of “tins” put on the table by the Governors who lost at the lower courts have raised the bar so much that he couldn’t just catch up.  To make matters worse for Saraki, the Governor of Kwara state is not as ‘accommodating’ as before as the state allocations continuously dwindle.He(Saraki) is their friends but the Governors who lost at the lower courts have ‘upped  the ante’ while you are struggling to catch your breath.  I get am before nor be talk now o, saraki needs to “buckle” up or lose more.  He is on his own….

We are still watching the Supreme court drama as it unfolds…..Ewolewoo!!