You are here: Home / Other News / The 21 billion naira stolen by the 3 men must be returned. No story!! 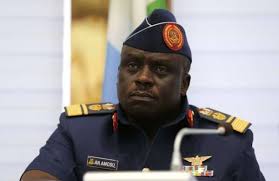 In 2014 alone, 3 people, the immediate past Chief of Air Staff, Air Marshal Adesola Amosu; a former Chief of Accounts and Budgeting in NAF, Air Vice Marshal Jacob Adigun (retd.); and a former Director of Finance and Budget, Air Commodore Olugbenga Gbadebo (retd.), chopped 21 billion naira. Like I always said, this is the amount that could be uncovered because something slipped. To understand the amount that couldn’t be detected, you only need to multiply that amount by 5. This is a wonderful, infact superb country I tell you. In other climes these guys would be lucky to still be seeing the sun.

The only way this fight can work is for the EFCC to freeze their accounts. They cannot be allowed to use the same money they stole to fight the system. It should never work. EFCc knows their salaries. Their pension and gratuity are known. They cannot be allowed to spend more that their legitimate means to fight the system. It would never add up. This is how to start the battle with rogues. We should stop apportioning any kind of respect to individuals suspected of doing things like this. A thief is a thief…

As we speak several luxurious properties have been seized from these guys. We are talking about Air Vice marshals here who are supposed to be the epitome of integrity of the Air force. Instead they are the epitome of the reason our military has found it difficult to win anything. 21 billion naira is almost 10% of the internally generated revenue of Lagos state. Infact the whole of the south west, outside lagos state, never generated close to 21 billion naira as internally generated revenue in 2014. However we’ve got people from the same area chopping 21 billion naira for themselves alone. If this is not wickedness, please tell me what it is.

I still do not understand how people like these are still allowed to sleep with their wives. I don’t get how you will be caught in this kind of scheme yet you would still be regarded as a big man. Chopping military money is treason. It is a matter of national security. Once national security is compromised by people who are supposed to ensure it, it is nothing but a treasonable offence.

After stealing the funds, these people went of properties buying spree in Lagos, Abuja and London. With the kind of money they made, the properties they went for were properties for the kings. Some of them are: at 50-52, Tenterden Grove, London (NW4 1TH) and 93B, Shirehall Park, London (NW4 2QU), United Kingdom. If you are in London, check these places out and you would wonder whether you’ve not be wasting your years in that city.

They also raided properties in Lagos like 40A, Bourdillon, Ikoyi and on Sinari Daranijo, Victoria Island which they bought with N900 million and N1.5 billion respectively . They also bought another worth over N1.7 billion on Agobogba Street, Parkview, Ikoyi. My people I don’t know whether this 9-5pm work would cut any ice o! You can see levels in this mindless stealing.

They didn’t end in Lagos and London, they zoomed into Abuja by buying the Cappadol Mall – on Adetokunbo Ademola Street, Wuse II, Abuja at N750 million naira. These are some of the properties we could bring out in this madness.
The money meant for the Nigeria military was decimated and shared by the people entrusted with the lives of the men of the armed forces.
Please don’t allow them to use the looted funds to fight the system. Their accounts,wherever seen or sniffed, should be put on lien..ewolewoo!!