You are here: Home / Chronicles / Tony Anenih: No condition is permanent 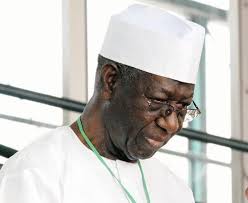 There is this talk out there in the streets, “No condition is permanent”. Late  Nnamdi Azikwe  also told Late Ukpabi Asika in the early 70s when the later(who was just appointed an administrator of south east) was dismissing the former as an “ex this, former that..”. Suddenly the table changed and Asika also became ëx this, former that”. No condition is permanent in many cases my people.

This now brings me to Chief Tony Anenih.  He was Mr Enforcer.He was Mr Fix it. He was Mobilizer by force or fire. I knew what happened in Abuja in 1999 when “Mr Enforcer”  enforced  Gemade to  be PDP chairman over Sunday Awoniyi . He(Anenih) was the right hand man of OBJ then.  He dutifully “performed” in that regard. I knew what happened in 2003 when Mr Fix it told Atiku( the V.P then!!) in plain language to jettison his idea of becoming President because there was no vacancy in Aso rock.  We all saw what he did in 2007 by enforcing OBJ’s goal of making late Yaradua the President and Goodluck Jonathan the VP. If you doubt this ask Peter odili.

From 199 to 2007, he was in charge of coordinating PDP activities, though he was neither the substantive chairman n nor the secretary.  When he was the minister of works, he was in charge of colossal sum of money to spend for “roads”. But he didn’t spend naadaa!! OBJ disclosed it himself when he said that he released 300 billion naira for roads without naadaa!! However, OBJ couldn’t do anything because Mr fix it was using the money to Fund his “fixing and enforcing activities” while also spreading love to the PDP machinery.  He(Anenih) was in charge and he was performing.

During Much of Jonathan’s time, he was slightly “pushed aside” by smarter crooks perhaps because of age or because he was not adapting quickly enough to the fast pace money laundering schemes being demanded at that time. However, he still retained some power. This power made him a person to be considered in this Dasuki ‘s money sharing enterprise.  He collected the money as usual and he did his normal fixing game, though on a smaller scale.   I said  on a smaller scale, because, he was in charge of smaller parties while Dasuki took care of the bigger goons.

As we speak, Tony Anenih is not sleeping pretty.  The condition he is used to has changed. He has a new pharaoh who doesn’t recognise that he is Mr fix it anymore. The situation where no one asks him about money spent is no longer tenable. My Fix it is now being fixed. Wahala dey o!!

He has been talking like a “caught bank robber” who is spewing the amount he got from his loot and the people he shared it with.  The more he is squeezed, the louder he reels out the names. Out of his noise from his hide out, we are getting to hear the name of Tanko yakassi(53million naira), Olu falae(100million naira), Ladoja(100 million naira) among others.. Meanwhile, did the people who kidnapped chief Olu falae knew about this money? Just asking oo!!

The last time we heard of him, he said he was in a London clinic recuperating from a heart surgery. We wish him soonest recovery.  However he knows that we know that he knows  that condition  has changed…..Ewolewoooo!!