You are here: Home / Chronicles / VP Sambo’s US surgery: Another example of man’s inhumanity to.. 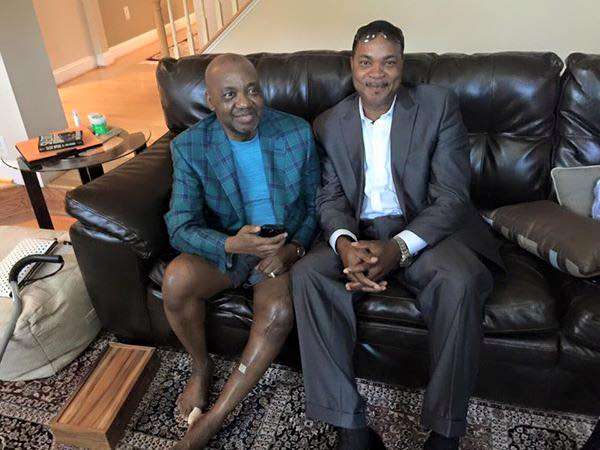 The immediate past vice president, Namadi  Sambo, of Nigeria is presently in United States. What is he doing there? He is recuperating from a knee surgery performed on him sometime in August. According to Sahara reporters, he consulted a lot of Hospitals in the US before zeroing in on the one that performed the operation on him. To Mr Vice President, I say sorry o!! I wish you soonest recovery.

However, that is the end of my goodwill I must confess. We have someone who was the former governor of Kaduna state and also the former vice President unable to be treated by our hospitals in Nigeria? He solely ran the budget of Kaduna state before his adventure in the Presidency and he couldn’t get any hospital in Kaduna state up to the standard he would be personally comfortable with? He was, with his boss GEJ, responsible for the budget of Nigeria for over five years when crude oil was selling above $120/barrel yet couldn’t get any of the federal hospitals to a standard that he could be comfortable with?  C’mon!! Are we supposed to be that daft not to see through this mind-blowing wickedness?

If people who administered our commonwealth could show us in such brazen manner that they didn’t administer the resources appropriately, what do they really expect?  Sympathy?  If you are looking for an example of how our system has been run aground by the last administration despite all the money they’ve got, please look at the picture of a recuperating former VP in an American hospital.

We have gotten to a stage in Nigeria where these public officials throw the fact they just chopped our money on our faces. The other day it was Deziani’s lawyer regaling us with the fact that she is presently sick and recuperating in London.  Please don’t forget Godswill  Akpabio who said he had built “ëldorado” in Akwa Ibom state only for him to run away from the “ëldorado”  he claimed to have built. He ran to the UK for an accident treatment. Just imagine that nonsense!!  Now it is the Former Vice President who is recuperating in US. So what happened to all the money made in the last 6 years? Where are the medical infrastructures they claimed they spent their billions on? Where are they?

Former Vice President Sambo, you are a very wicked man.  Are you telling me to go to hospitals,  that you claimed to have spent money on, for my surgery when you wouldn’t dare go there? If you have lost faith in what you guys claimed to have built, what now happens to us? On this score I agree with Madam Patience Jonathan when she said “Dias Goduoooo!!!”.

I wish you safe recovery but it doesn’t remove the fact that I consider you a very baaad man!! Ewolewooo!!! you can follow us on twitter @Ewolewoo1