You are here: Home / Chronicles / Wike: When it’s supposed to be sunrise but it is sunset… 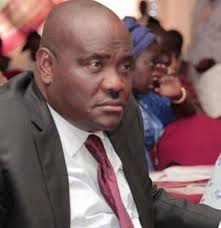 Someone , somewhere should tell Wike that there is fire on the mountain.

Someone should wake him up to the reality that Jonathan is no more in Power.

Wike needs to be reminded that his “nemesis” who used to be his “bosom” friend is now a minister of the federal republic. He knows better than me that “wahala dey!”.

The appeal court has just confirmed what the lower court told us. Both upturned his election. He is fighting on so many fronts as the case is. He is losing badly like Jose Mourinho.  He is at the receiving end of a  brutal political in-fighting and he is really fearing rather badly. He is losing the battle with bruised faces yet no-one listening to his cries.

I can sense what would be going on now as the case is in the Supreme Court. I can imagine what is happening to Rivers state account as we speak. I would have advised him to get in touch with Bukola Saraki(the senate President) but Saraki is busy practising his own dribbling skills against the nation Judiciary. He would be too busy to listen to Wike now.

Life can be funny. Life can be brutal sometimes. Life can be really mysterious. This Wike was a friend that Amaechi saw no wrong with when the going was good. They were the best of pals. In 2009, Wike was arrested for having about 5 billion naira in his account. He was charged with money laundering because of this. Do you know who helped in “scattering” the case? Rotimi Amaechi!!  He made sure that the appeal court “killed” the matter.  Now both of them are sworn enemies. You can see life??

However for Wike, sunset is gradually beckoning.  He should have known that once the backbone power is inoperable, damaged or switched off, the infrastructure collapses.  As Jonathan left the scene, his backbone becomes fish-bone.  He is on his own  as we speak.

Though it is morning, Wike shouldn’t be agree if I say Good night Sir…Ewolewooo!!!